Petros Marmarinos’ evocatively simple compositions captivate with their finesse and sculptural sensibility. At his workshop near the ancient quarries of Tinos, he experiments with modern, classic and unexpected creations.

Every artist is drawn to a medium that is a conduit for his creativity; for Petros Marmarinos, painting would have been his first choice. But he grew up on Tinos, surrounded by millennia-old marble quarries and a long history of artisans replicating iconic ancient Greek sculptures, the sound of the chisel chipping away at unforgiving marble and the sight of his father and grandfather covered in fine marble dust. Marmarinos had to succumb to a calling more powerful than himself. But in doing so, he brings his own unorthodox approach to marble-sculpting, fashioning creations that reflect the Cycladic vernacular with flashes of modernity. He speaks to Athens Insider on his approach to marble craftsmanship from his workshop on Tinos.

FS: You think of Greek marble and ancient statues spring to mind.  Your marble creations marry contemporary, minimalist elements with traditional marble-sculpting techniques to create objects that score high points both in aesthetics and functionality. How difficult was it to break away from the conventional expectations of your craft? To literally break away from the mould.

PM: Initially, of course you’re moulded to follow a specific line. But then it is the daily friction with the object that unfolds your inclinations and shapes your personal style. I firmly believe that you cannot create without being influenced by your everyday reality or adapt your creations accordingly.  If you live in the present, your creations should mirror the present, but always through the prism of past knowledge. You observe the past and learn from it. 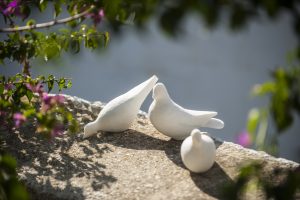 You observe the evolutionary path from the past to the present and finally you capture it with your own perception. It’s definitely hard to get away from the classic one and it’s something you learn to hold on to well, but you want to delve deeper. You have to dig deeper. There is a constant search in the art. A search that is unsatisfied. You never stop. Only when you stop producing art, which for an artist means as long as he lives.

FS: You come from Tinos, which has a long tradition in marble-sculpting, and your workshop is located just behind that of the legendary sculptor Halepas, arguably Greece’s most well-known marble craftsman after Phidias who chiselled the columns of the Parthenon. How influential have Tinos and Halepas been in your choice of vocation?

PM: My place of origin obviously influenced my course to a great extent. I grew up in a village with a long tradition of marble sculpture and fine arts in general. It is no accident that Tinos had its own School of Fine Arts. First of all, I think my artistic grasp is basically hereditary. My family’s artistic tradition fuelled my artistic inclination. And, of course, the fact that Tinos is a place where, apart from the art and apprenticeship of marble sculpture, you encounter the pure matter of marble. It is a place full of quarries, which is one with the Tinian landscape and something that I consider natural. The daily contact with the environment of the island, and in particular, with that of Pyrgos, from where I come from, which in itself is a large open living museum, educates and informs your aesthetics and affects you subconsciously. It is no coincidence that a great number of great artists come from this island.

So you understand that you need to continue this living history. And since the marble-sculpting techniques of Tinos have been registered under UNESCO’s List of the Intangible Cultural Heritage of Humanity, as a craftsman, you have the responsibility of safeguarding this important tradition. And you endeavor to give the best of yourself to be worthy of this great challenge.

FS: Your objects have the simple elegance and design vernacular of the Cycladic islands.  Your pigeons, inspired by Tinos’ dovecotes, your raki glasses, as indeed all your creations, are not just quintessentially Greek, but also highly utilitarian objects. Do you believe that for art to thrive it should have value beyond its aesthetic appeal? And that we should incorporate art and beauty into our daily lives, with the most mundane of objects being a joy to behold, an extension of one’s personality?

PM: Nowadays, definitely giving practical application to your works is very important. Unfortunately, it is very difficult to produce purely artworks without any useful value or application. This does not necessarily mean that the artistic substance of objects is neutralized, you simply have to create small objects, with high aesthetics and a lot of work (because of the detail) as it is very difficult to promote pure artworks or sculpture.

So I think it’s a combination of art and usability that characterizes today, because we live in a time when our aesthetics in all things plays a huge role. But this combination is really nice. For me it is very important that you manage to capture the idea of ​​a usable object with your aesthetics and the result is exactly what your imagination expected. And, of course, the public’s response is enormous satisfaction for me. It is something irreplaceable. 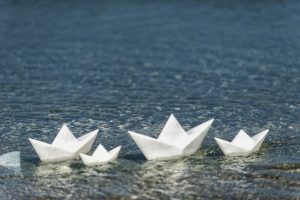 Artistic recognition by the world is something invaluable. Emotional earnings are much higher than financial gains. When you see that people appreciate and cheer your work, it is something indescribable. And something that creates a bridge to communicate with the world. This acceptance therefore makes you go further and offer more and more things. It is a source of inspiration.

To appreciate Tinos’ rich marble-crafting heritage, visit the Museum of Marble Crafts. The museum, under the auspices of the Piraeus Bank Group Cultural Foundation, houses an impressive collection of authentic artefacts and everyday objects made of marble. 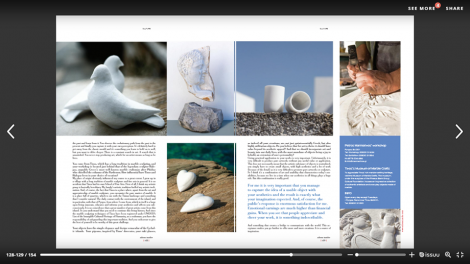